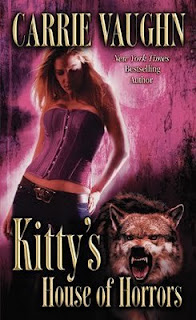 REALITY BITES Talk radio host and werewolf Kitty Norville has agreed to appear on TV's first all-supernatural reality show. She's expecting cheesy competitions and manufactured drama starring shapeshifters, vampires, and psychics. But what begins as a publicity stunt will turn into a fight for her life. The cast members, including Kitty, arrive at the remote mountain lodge where the show is set. As soon as filming starts, violence erupts and Kitty suspects that the show is a cover for a nefarious plot. Then the cameras stop rolling, cast members start dying, and Kitty realizes she and her monster housemates are ironically the ultimate prize in a very different game. Stranded with no power, no phones, and no way to know who can be trusted, she must find a way to defeat the evil closing in . . . before it kills them all. (Goodreads.com)

This is my first time reading this author or series or being in this universe.

I did like that Kitty was a strong female character who becomes a werewolf. I liked that she was married and loved her husband Ben , very much. I liked the cast of characters in this book from Magic to Vampires. I did think it was an interesting concept of having all supernatural in " Big Brother " house.

I wouldn't classify this as Chick lit or Fantasy-- It was an enjoyable read and loved that there was some mystery to the book. It was a light read.

Thanks to Hachettebookgroup for the book to review. This is my Honest review and I was only given the book review and the opinions expressed are mine and mine alone.
written by Julie@My5monkeys