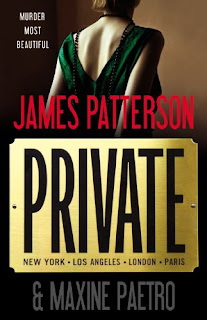 Former Marine and CIA agent Jack Morgan inherits his father's renowned security and detective business--along with a case load that tests him to the breaking point. Getting to the bottom of an NFL gambling scandal and an unsolved LAPD investigation into 18 school girl slayings would be enough. On top of all that, Morgan takes on solving the horrific murder of his best friend's wife.


As Morgan fights the urge to exact brutal revenge on that killer, he has to navigate a workplace imbroglio that could blow the roof off his elite agency. And it's an especially explosive situation . . . because the love affair is his own.( Goodreads.com )

Jack has his own agency to solve crimes and during the book they are solving 3 cases.
-- 12 teenagers being killed
-- football( NFL) & gambling
--- Shelby killed

Jack has an interesting life as a ex military man who still has some guilt over what happened with his troup. He works with a previous love interest , Justine and new love interest is Colleen. This does play a part in the book.

He also works with a great tech team at his office , and they nick names as SCI or Mobot . There is mention of family mentioned but not that often. Tommy is in Rehab

I would have to say that this some of his better fare. I enjoyed these new characters and hoping that this is a series because I have more questions about Tommy , and those phone calls.  This was a quick read and enjoyed the mystery with all the cases . I was trying to figure who done it or was really bad.

This one book that I would recommend to all my friends.

Thanks to Little Brown for the book and this book comes out in June and this is my Honest review.
written by Julie@My5monkeys