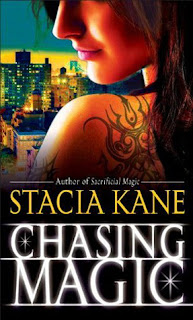 Chess is still a church witch and navigating her relationship with Terrible. She is invited to Elder Griffin's wedding and wants to bring Terrible as her date. She has never brought both of her worlds together  til the wedding . She has chosen Terrible but its still tough to deal with Lex.  She still see Lex and Blue from time to time, and he still supplies her with drugs. Lex would like Terrible to work for him but he declines.

When there is a issue in downside that effects both Bump and Lex's territories  . The people in downside are acting even more weirder , and there are some more strange things that go bump at night. Strange things are happening at the docks, and with in both territories. There is death magic and even

This book was about actions and consequences of them. Chess is taking responsibility and owns up to them. She has only one good friend through the church. Chess also has alot of inner turmoil and tries to right the wrongs, and take care of those she loves.

I stayed late again to figure out who was causing all this problems in downside.

Best Lines:  Pride was such a funny thing. People would starve for it; they'd kill to keep it or kill because it had been injured. Pride wasn't something she'd ever had a lot of. Her pride came from things beyond her control. She was proud of her magical abilities , but those had just happened, an accident at birth. She was proud of Terrible, proud to be with him,but that was just because he was who he was.

That was the problem with love, though , wasn't it. It couldn't be helped, couldn't be controlled. It just roared in and took whatever it wanted, destroyed what it wanted; the most dangerous addiction of all because nobody survived it intact. But an addiction that was impossible to let go, because even through her misery and the awful certainty that the right thing to do would be to end it before she caused him any more pain, she couldn't.

The book comes out June 26

Thanks to Random House and this is my Honest Review